Web 3.0 refers to a significant change in how we use the internet. The previous internet, Web 1.0, existed between 1990 and 2004. You used to go to the internet to find information back then. Compared to the number of people who consumed content, the number of people who created it was insignificant. Then there’s Web 2.0, which is today’s internet. This “phase” of the internet revolves around user-generated content. Users interact through social media sites such as Instagram, Facebook, and Youtube rather than simply searching the internet for information. Sharing videos, leaving comments, liking photos, and other interactions are examples of interactions. The Metaverse is a new direction for people to interact with the internet that converts it from two to three dimensions.

Understanding what the decentralized web is will aid our comprehension. Large corporations dominate today’s Web2; however, this quickly changes to Web3. It is also a way for the internet and virtual worlds to merge so seamlessly in our daily lives that we can interact with both at the same time. This post will examine the differences between Web 3.0 and the Metaverse and how the two might collaborate more in the future.

Competition for Web 3.0 because it hasn’t arrived yet. However, all indications are that the future internet will be based on blockchain technology. In practice, this means that rather than spending time on social media platforms and websites that own and monetize the data and content we create, we will use search engines and social networks that use blockchain to control that content and data.

The term “metaverse” was invented by author Neal Stephenson in his 1992 science fiction novel Snow Crash. He used the term to describe a three-dimensional virtual world. While Web 3.0 is concerned with the future development of the internet, the metaverse is concerned with how we will interact with it. Proponents of these online worlds assert that we will “enter” the Metaverse through virtual technology and move between virtual worlds via digital avatars.

Thanks to blockchain architecture, web 3.0 will be completely decentralized and controlled by no single group of organizations. This is one of the main reasons Web3 has only recently become a development possibility, as Berners-vision Lee’s decentralization would be impossible without it. Users, creators, and every other online entity would coexist on a decentralized spectrum enabled by a specially designed protocol.

What are the five outstanding characteristics of Web 3.0?

Web 3.0, as defined in 2022, builds on this progress by incorporating new technologies such as artificial intelligence (AI), augmented reality, blockchain, and virtual reality to create decentralized and highly engaging internet experiences. In addition to its semantic architecture, Web 3.0 is defined by the following key traits and characteristics:

Use of 3D graphics

The Spatial Web design by Deloitte is a good example, as it combines a digital information layer, a physical layer, and a spatial interaction layer to make the internet accessible through new, non-text channels. This includes voice and AR/VR worlds, where Web 3.0 allows for rich interactions between the users and online service providers.

Web 3.0 aspires to universal internet access across regions, networks, and devices. We currently use PCs and smartphones for online activities and industrial handhelds in some cases. Web 3.0 will expand device reach in the future by making it available on wearables, smart appliances, AR/VR gear, and other devices. This will also involve the development of a new generation of web browsers.

Incentives for Users and Creators

Web 3.0 will strive for greater economic balance among creators. There are currently few checks and balances on how online creators are compensated for their work, and a small percentage of them frequently receive a disproportionate share of incentives. In the meantime, the concept of user incentivization does not exist. Users can be rewarded with cryptocurrency for sharing their data to keep things transparent. This clear incentivization will be a big part of the Web 3.0 experience, driving accountability among all stakeholders.

This Web 3.0 requirement is slightly more difficult to achieve. The internet is currently dominated by a small number of technology behemoths and conglomerates that serve as gatekeepers for data and algorithmic processes. The new internet will be built on an open-source architecture that anyone can use, modify, monetize, and extend without limitations. Peer reviews will become more common with open-source architecture, encouraging greater accountability.

Thanks to blockchain architecture, web 3.0 will be completely decentralized and controlled by no single group of organizations. This is one of the primary reasons Web3 has only recently become a viable development option, as Berners-decentralization Lee’s would be impossible without it. Users, creators, and all other online entities would coexist on a decentralized spectrum made possible by a specially designed protocol.

How is Metaverse related to Web 3.0?

Web 3.0 refers to a Metaverse technology that uses the internet as its foundation. In other words, its virtual world would be available online and accessible via a web browser. This is in contrast to VR technology, which typically requires the purchase of expensive hardware such as Oculus Rift and current metaverses such as Second Life, which need you to download an application before you can access it. It is frequently compared to virtual reality due to its immersive experience (VR). However, it is significant not to lose sight of the big picture: it’s not about games or entertainment, as VR technology companies try to convince us.

This makes it the best location for businesses to connect and network. It also enables educators to teach students worldwide without requiring them to leave their homes. The use of NFTs, or non-fungible tokens, is a key structure of Web 3.0. NFTs keep track of your items in games and other metaverses. These tokens can be traded with others in the Meta technology or used as currency.

Since it is about connecting people through digital space, people can freely trade their digital goods and items with others using NFTs. It allows people to access the Meta technology without leaving their homes, which is ideal for those unable to travel due to age or health issues.

Web 3.0 will be vastly different from what we know as Web 2.0. Metaverse will play a significant role in UX; hints at what’s to come will pique people’s interest.

Redefining Our Perspectives on the World

The arrival of Web 3.0, described as an extension of Web 2.0, but the term “Web 3.0” has been utilized as an empty buzzword many times and has practically lost its meaning. Today, this buzzword is used everywhere to generate hype, but what exactly is Web 3.0, and how does the Meta technology contribute to the transition from Web 2.0?

The transition from Web 1.0 to 2.0 was relatively simple. Web 1.0 was a collection of static, flat text- or image-based websites with little interaction margin for visitors. Web 2.0 enabled people to interact and socialize freely and talk and share their content. People’s collaboration and social interactions defined Web 2.0 rather than technology, so what is the bottom line of the evolution of Web 3.0?

While the web is already talking about reality, the Meta technology is required to augment the web until it resembles our real world. As VR technologies redefine the way we experience our daily lives, we will learn to interact with the web using all of our senses. The physical and virtual worlds will eventually merge into a single, interconnected continuum. PlugXR creates a creator-friendly, no-code platform that allows you to create immersive experiences.

Some claimed that massively multiplayer online role playing games (MMORPGs) were the first step toward a fully virtualized world in the early 2000s. It is certainly possible. Games that allow you to buy virtual goods and services with real money are not new, so a basic form of Web 3.0 interaction already exists.

According to what we’ve seen thus far, many modern MMOGs and gaming platforms are beginning to implement virtual technologies that significantly enhance and make players’ experiences more immersive.

Virtual Transactions on the Blockchain

Today, when we shop online, we buy and sell items by navigating between pages. Virtualization has the potential to turn every space in our world into a dynamic channel with which people can interact. Using technologies such as the recently announced VERSES protocol for spatial interaction, blockchain, and smart contracts can program every space in our cities and towns. For example, access to a hotel room can be restricted to those with the key.

These protocols can virtually virtualize every transaction, from purchasing physical and digital items to acquiring various services. VR and AR can serve as physical and virtual space meeting points. As the evolution of physical shops into e-commerce resulted from the transition from Web 1.0 to Web 2.0, the virtualization of Web 3.0 may result in the birth of a new generation of “commerce” shops, a modern blockchain-based economy.

The Future of the Arts

Metaverse will enhance the impact of all arts by making every sensory experience more immersive. If movies can be viewed through a VR headset, it is easy to envision the future of Netflix or any other streaming website. All artistic content will be created (and consumed by users) in 3D formats, such as art galleries with paintings hanging on the walls and statues that can be touched without damage. Artists will share their online portfolios in a new 3D format that can now be viewed on a PC, smartphone, or next-generation VR headset in Web 3.0.

In the near future, the two points described above can be easily combined. While v-commerce may appear to be a far-future technology, the entire concept of shopping can be completely revolutionized within Web 3.0 by introducing some basic virtualization elements. Instead of changing how people interact with physical space, as described above, the entire web can learn from MMOGs and begin hosting “virtual worlds” with shops, buildings, and other areas.

Customers can interact with products in virtual shopping malls or explore a property before purchasing it from a real estate agency using new “virtual social media” platforms. It is no surprise that major corporations such as Alibaba, Amazon, and Ikea have already invested in the metaverse.

Virtualization is a critical component of the Web 3.0 transition. The next internet revolution is on the horizon. It can become a reality as soon as we can go beyond all of the current limitations of VR technologies. As previously stated, the Metaverse is still in its conceptual stages.
Still, as Web 3.0 matures and becomes a more functional foundation for concepts such as the Metaverse, we can anticipate some cool applications of this technology inside and outside the gaming industry. Looking at this opportunity, PlugXR has designed the innovative no coding platform that lets you enjoy this Immersive experience. With an expertise in Augmented Technology we leave no stone unturned to offer you the right solutions. 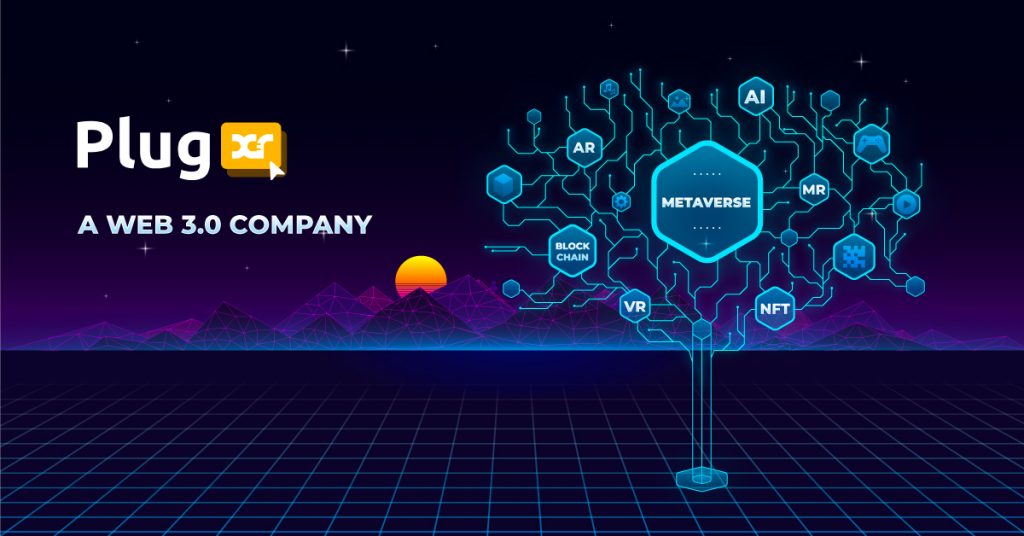